Home » Features » One Electrician’s Life Lesson: The Case for Electrical Safety Training for both Electricians and Non-Electricians

One Electrician’s Life Lesson: The Case for Electrical Safety Training for both Electricians and Non-Electricians 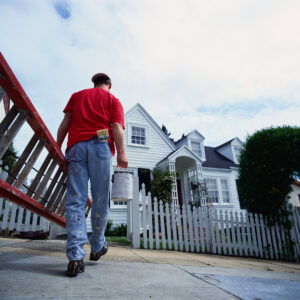 Proper and adequate training is essential to the prevention of electrical related injuries to all personnel that are at risk, not just electricians.

The sirens were deafening, even to my 13-year-old ears. My good friend, Heath, and I were playing an intense game of summer basketball in my driveway. The fact that I was losing and, as always, determined to win, should have been reason enough for my focus to be on the game and the game alone. But it was impossible not to hear the sirens of the emergency vehicles rushing down our road and begin wondering – “What’s going on? What happened? Where are they going?”. Heath’s house was across the street, about 10 houses down. From our slightly distant perspective, it appeared that his house was right where the emergency vehicles stopped.

Throwing down the basketball in my yard, I took off sprinting in the direction of Heath’s house, right after my friend who already had a two-house lead on me. We both likely set world records based on how fast our teenage legs enabled our arrival to Heath’s yard. The paramedics had already begun to tend to Heath’s brother, Josh, who was lying motionless in their driveway. Their mother was outside and crying hysterically. Heath was a “surprise” baby for his parents and Josh was almost 10 years older than us. Josh worked as a painter for a local contractor. Work was slow that summer, so Josh had offered to repaint the exterior of his parents’ house. Scanning the area to try and make sense of it all, I noticed a couple of paint cans and an aluminum extension ladder on the driveway near Josh. Transitioning my eyes upward, it all began making sense. At this point, life experience was not my specialty, but even my teenage mind could put the pieces together: Josh plus conductive aluminum ladder plus overhead power lines is equal to why Josh is lying in the driveway. Josh had received an electrical shock. That day provided a life-lesson to me that I have carried with me every day of my nearly 30 years in the electrical industry, and I always will – electricity does not discriminate.

Not Just for Electricians

Electrical safety training is not just for electricians. Proper and adequate training is essential to the prevention of electrical related injuries to all personnel that are at risk. Is the plumber that is plugging his extension cord into a defective ground-fault circuit-interrupter (GFCI) at risk? What about the carpenter using a saw with a broken ground prong on the cord end? How about the painter using an aluminum ladder near overhead electrical lines? Non-electrical workers are exposed to many potential electrical hazards, every day. Not only is electrical safety training for non-electricians a necessity, but it’s also required. 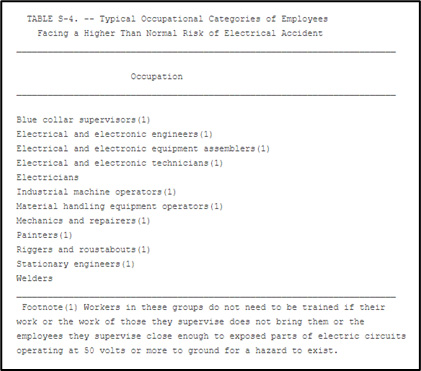 Occupational Safety and Health Administration (OSHA) Standard Number 1910.332(a) mandates electrical training for employees who face risk of electrical shock. 1910.332(a) Note states that training is required for all occupations listed in Table S-4 and the second sentence goes on to state that employees not listed in Table S-4, but that are reasonably expected to face the same risk due to electric shock or other electrical hazards, must also be trained. On a jobsite, or within a facility, a case could certainly be made that many workers not listed within Table S-4 are just as susceptible to the same risks that electrical workers could potentially face.

According to data provided by Electrical Safety Foundation International (ESFi), between 2011 and 2020, 44% of fatal electrical injuries occurred in the construction industry (Source: www.esfi.org/workplace-fatalities-and-injuries-2003-2020/). That means that 56% of all electrical fatalities were outside of the construction industry or trades. This statistic alone speaks to the need for mitigating risk of exposure to electrical hazards through further training. NFPA 70E®, Standard for Electrical Safety in the Workplace® is a great resource for defining enforceable responsibilities for both employers and employees to protect against electrical hazards that employees might be exposed to. OSHA itself is a large part of why NFPA 70E even exists. NFPA 70E provides the electrical safety prescriptive-based how methods of achieving the performance-based requirements of what OSHA demands of all occupational industries. Developing and implementing an Electrical Safety Program (ESP) aligned with the responsibilities and training defined within NFPA 70E is a vital component in reducing the risk associated with electrical hazards, for all workers. Employers and employees following the ESP, and holding one another accountable for doing so, is the other crucial piece in the electrical safety equation.

There was no ESP in place, or training that had been done. Josh was a white male, brown hair, blue eyes, football fan, avid golfer, practical joker, painter, brother, son, father-to-be…so much more, and still – electricity did not discriminate. The previous sentence was written in the past tense because the summer of 1989, along with a conductive ladder near electricity, resulted in the preventable loss of Josh’s life. All that he was, and all that he would be, died with him that day. A life cut way too short, that brought his family so much heartache and pain. I know that Josh’s family isn’t the only one. It’s extremely unfortunate that there are tens of thousands of others out there who know the story of Josh all too well and have been impacted by loss of their own. They may have been male or female, white or black, young or old, electrical workers or non-electrical workers, etc. The differentiations in the victims are endless but one similarity rests with all of them – electricity did not discriminate. Loss of life is immeasurable, which in turn makes prevention priceless. Only through proper and adequate electrical training can we prevent the victims list from growing and, in some small way, honor those that have been lost. ESW

Important Notice: Any opinion expressed in this column (article) is the personal opinion of the author and does not necessarily represent the official position of NFPA or its Technical Committees. In addition, this piece is neither intended, nor should it be relied upon, to provide professional consultation or services.

Corey Hannahs is a Senior Electrical Content Specialist at the National Fire Protection Association (NFPA). In his current role, he serves as an electrical subject matter expert in the development of products and services that support NFPA documents and stakeholders. Hannahs is a third-generation electrician, holding licenses as a master electrician, contractor, inspector, and plan reviewer in the state of Michigan. He was twice appointed to the State of Michigan’s Electrical Administrative Board by former Governor Rick Snyder, and he received United States Special Congressional Recognition for founding the B.O.P. (Building Opportunities for People) Program, which teaches construction skills to homeless and underprivileged individuals.