Flash fire is a serious hazard in many workplace environments. Workers in the following industries could be exposed to locations that are at risk for flash fire: chemical processing, petrochemical processing, storage & distribution, oil and gas drilling, even certain production and material handling facilities. 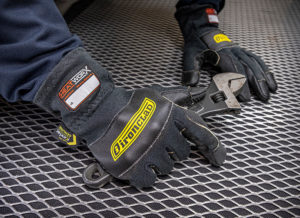 The Heatworx® Heavy Duty FR is said to be the first ever NFPA 2112:2018 certified glove.

A flash fire is a sudden, intense fire caused by ignition of a mixture of air and a dispersed flammable substance such as dust, gas, or the vapors of an ignitable liquid. It is characterized by high temperature, a duration of typically 3 to 6 seconds, and a rapidly moving flame front. A flash fire can cause extreme heat and burn injuries to people, which can often be fatal. Facility safety professionals spend countless hours on prevention programs, to reduce the potential of a flash fire incident. While they are a rare event, the results are so destructive that employees at risk for flash fire exposure are typically required to wear flame-resistant clothing that is specifically designed to protect, as much as possible, from serious injury and death.

The most utilized testing standard for flash fire clothing is NFPA 2112:2018, titled ‘Standard on Flame-Resistant Clothing for Protection of Industrial Personnel Against Short-Duration Thermal Exposures from Fire’. NFPA 2112 sets the minimum performance criteria for flash fire rated FR fabric, thread, hardware and labels, and certain design criteria. It includes multiple tests on the fabrics, components, and complete garment, including flame resistance, heat resistance, thermal shrinkage, heat transfer performance, launderability, and percentage body burn. All garments must be tested, certified, and then retested and recertified annually by an authorized testing body such as Underwriter’s Laboratory (UL). Production facilities are audited for quality control standards up to four times per year. Finally, a high durability label will be affixed to the garment, signifying its approved status.

The National Fire Protection Agency first issued NFPA 2112 in 2001. The standard has been updated several times in the past 20 years; surprisingly, though, gloves were not included in the testing standard until the most current edition was released, which occurred in 2018. Due to this omission, workers hands have not been protected from flash fire incidences. Many people have wondered why gloves weren’t included in the testing protocol. After all, if a person survives a flash fire incident but their hands are badly burned due to lack of certified flame protection, they will most likely never be able to return to work again in the same capacity. Hands are typically the most critical functioning element for your workforce – there is no reason for hands and fingers to be less protected than the rest of the body. 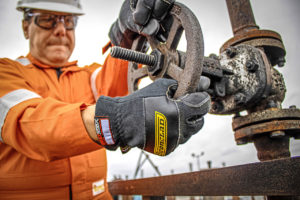 Hands are typically the most critical functioning element for your workforce.

Back to the question of why gloves weren’t included in NFPA 2112 until recently. The answer lies in the details of the testing protocol, and the major differences between the construction of gloves versus clothing. An FR garment is typically constructed of a single type of fabric, cut into large swatches, and sewn together in flat seams. Gloves, on the other hand, are made from a wide variety of fabrics that could be man-made or natural, knit, woven or non-woven, with multiple layers that are often different from the palm to the back of the hand. Fabric and material swatches can be very small, sewn into three dimensional seams. And yet other gloves have no fabric swatches at all – they are constructed of engineered and natural yarns, knitted directly into a glove shape on computer-controlled machines, before being dipped into polymer solutions. Impact protection, knuckle panels, palm reinforcements, inner liners, etc. all complicate matters even further. In effect, gloves present an extremely difficult testing regiment compared to garments.

In fact, even after gloves were included in the testing standard in 2018, almost three years passed before a single glove successfully passed the NFPA 2112:2018 standard for flash fire protection. I was fortunate enough to have first-hand knowledge of that process. Engineers from the testing lab, ArcWear, the certifying body, Underwriters Laboratory, and the glove manufacturer, Ironclad Performance Wear, worked together for months dissecting each step of the testing process; creating the right methodology for testing every panel, every layer, and every thread of the glove according to each of the applicable test sections – flame resistance, heat resistance, thermal shrinkage, heat transfer performance, and launderability. It was a detailed, time-consuming, science-driven, and ultimately very rewarding process. Not only did the collaborative effort result in the first ever NFPA 2112:2018 certified glove, the Heatworx® Heavy Duty FR, but it paved the way for future NFPA 2112 glove certifications.

For the first time ever, you now have the ability to protect two of your workers’ most valuable assets, their hands, from flash fire hazards. While there is only one glove option today, thanks to the work of this pioneering group there will be more options in the future. So, the next time you are creating a workplace safety flash fire protection program, include NFPA 2112 certified clothing AND GLOVES for your employees. They will thank you. ESW

Eric Jaeger has been with Ironclad since 2001 and managing the Ironclad Performance Wear division of Brighton-Best International since December 2017. Prior to being named General Manager, he ran several departments including research and development, sourcing, and operations. He has a degree in Bioengineering and was a Biomedical Engineer prior to switching to the PPE market (www.ironclad.com).

Five Ways to Protect Workers During Plant Turn-Around or Shutdowns

By Brian Earl, Contributor When creating a project plan for plant shutdowns, there is one aspect you can't compromise on: employee safety. Although each facility is ...
Read More →

By Colin Duncan, Contributor In 2019, the U.S. Bureau of Labor Statistics (BLS) reported 166 workers were killed on the job due to exposure to electricity ...
Read More →

Arc Flash Labels: What You Need to Know