Why Relying on Safety Training and PPE Can Be Fatal

When workers are unsafe, a company cannot prosper. Unfortunately, electrical shock incidents are not only dangerous, but common. Until companies shift their focus to preventing hazards instead of preventing incidents within hazardous conditions, lives, company morale, productivity, and OSHA fines will continue to be on the line.

More than 90% of electrical fatalities among U.S. workers are due to electrical shock. This does not account for the high proportion of injuries and fatalities that are often misclassified under a different cause of death. And yet shock is downplayed within industrial settings. Most electrical safety training programs do not cover shock. Even with training, workers during production usually do not exercise precaution against it.

Oftentimes, companies’ safety methods primarily focus on providing workers with PPE and safety training, which they assume makes them safe from any incidents occurring. However, PPE is considered the last line of defense on the hierarchy of controls, with safety training (which is an “administrative control”) falling next in line. A last line of defense is a last resort, and thus for companies to devote their resources to using last-resort protection methods, the disproportionate rate of worker fatalities due to electrical shock each year comes as no surprise. To ensure your workers are safe, place emphasis on the only bottom line that matters: prevention through design saves lives.

What the Littelfuse Survey Found

The Respondents: Littelfuse surveyed 575 people who work directly with electricity from Jan. 23 to Feb. 21, 2020. Roughly 70% of the people surveyed primarily work with more than 220 volts, and the other 30% mostly work with 220 volts or less. Company size was evenly represented among the respondents (29% work at companies with more than 1,000 employees, 21% work at companies with 1 to 19 employees). 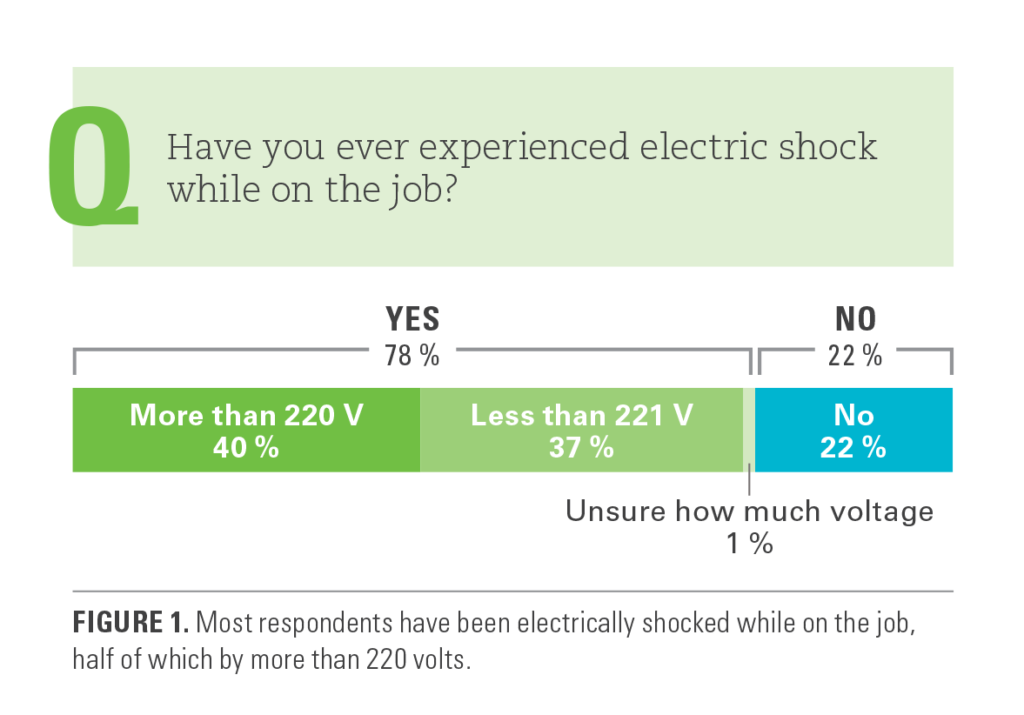 Nearly 40% of the respondents said they have been shocked by more than 220 volts while on the job, which was about half (51%) of the 78% who reported having been electrically shocked by any voltage (see Figure 1).

Most (86%) of the respondents who reported having experienced more than a 220-V shock also rated themselves as either “very confident” or “extremely confident” when they were asked to rate their ability to recognize an electrical hazard. This was significantly more than those who have never been shocked when on the job and slightly higher than those who reported having experienced shock from less than 220 volts (82%) (see Figure 2). Overconfidence was also frequently cited among respondents as the main reason why people at their facility work on live equipment.

Also, more than two-thirds of the respondents said that workers in their facility perform work on energized equipment. This is not only incredibly dangerous but is illegal per OSHA’s 29 CFR 1910.333(a)(1), which requires live parts that operate at 50 volts or more to be deenergized before employees work on or near them.

Respondents were asked using an open-answer field to cite the main reason people at their facility work on energized equipment: troubleshooting was the most common justification, followed by respondents provided for working on energized equipment. The second most common rationale was for production purposes (such as to avoid the economic loss of stopping the equipment), followed by overconfidence.

When analyzing the results, it became clear that not every facility’s safety training is working. For example, every respondent who cited PPE (or a form of it, such as gloves) as the main reason for why workers at their facility work on equipment while it’s energized also said they are provided electrical safety training by their workplace. If a worker believes they do not need to de-energize equipment if they wear PPE, then their safety training has failed.

Most alarmingly, among the respondents who cited PPE gloves and boots as the main reason for not de-energizing equipment before working on it also said they consider 550 volts or less to be a safe equipment voltage to ground to work on or near.

More than 50 volts of equipment voltage to ground is not safe to work on or near. However, when the survey asked the respondents how much equipment voltage they consider to be safe to work on or near, a quarter of the respondents believed more than 50 V is safe: 77% answered correctly; 9% believed up to 120 volts is safe; 5% considered up to 240 volts as safe; and 9% said 500 V is safe. 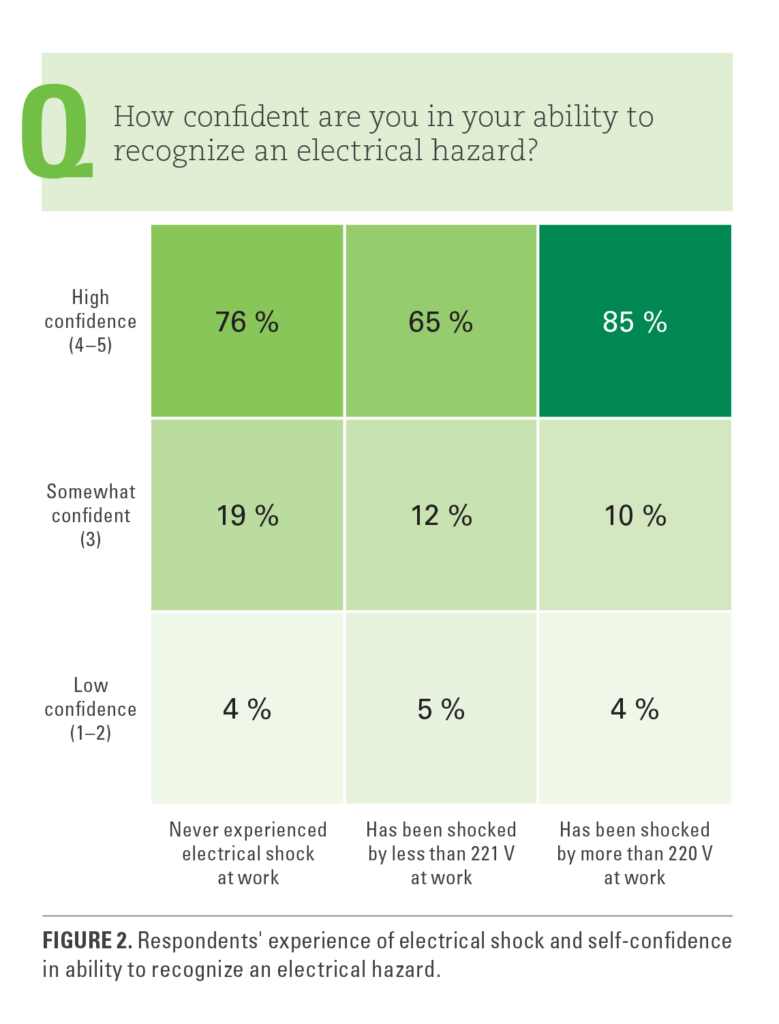 The survey found no connection between an accurate knowledge of how much voltage is safe to work on or near (50 volts) and those whose company provides them with safety training (see Figure 3). In other words, the rate of safety-trained workers who considered more than 50 volts to be hazardous to work on or near was the same as the rate of safety trained workers who believed up to 500 volts to be a safe working voltage.

If a worker cannot identify a safe working voltage from a hazardous condition, then their safety training failed. Any pertinent safety practices the worker was able to retain are useless if they can’t identify a hazard to begin with.

A corporate case study found that 40% of electrical injury incidents involved 250 volts or less and were indicative of a misconception that electrical safety is a nonissue in low voltages.

If safety training does not help to decrease the misconception that more than 50 volts is dangerous to work around, and if 40% of incidents involving 250 volts or less are due to this misconception, then safety by design is essential, even where not required under NEC.

Companies usually emphasize safety in hypothetical situations, but not when the situation occurs in real-time. Even the principles taught in safety training that resonate with workers are often abandoned during business operations.

Electrical injuries and fatalities are one of the most preventable types of occupational injury and fatality, and yet they continue to happen. Unlike other occupational hazards that center around the worker’s behavior, electrical shock hazards can be eliminated using a hard-science method: ground-fault circuit interrupters (GFCIs), which do not rely on the soft-based science of human-based behavior for them to work as hoped.

Most industrial sites require employees to wear PPE. However, standard-issue PPE does not protect from electrical shock and electrical workers can be lax in properly wearing electrical PPE. Workers often complain electrical gloves make it difficult to get the job done because they are cumbersome or bulky. As a result, many workers are found to remove their electrical gloves to perform the work. 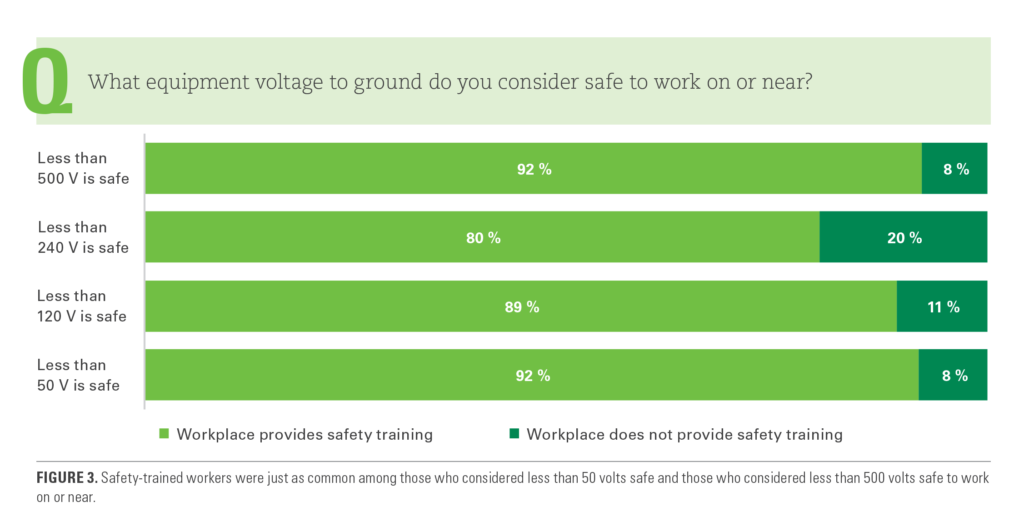 While electrical gloves are important, PPE is the last line of defense. Electrical gloves must maintain their dielectric properties, physical strength, flexibility, and durability for them to remain effective. Whether the worker ultimately wears them is a different story.

Safety is already at odds against shock hazards when PPE and training are the only hazard mitigations used by a company. To issue human-error prone workers PPE is important, but PPE that is simply assumed to be in working condition without it undergoing required testing is reckless. PPE is important, but it is not good enough.

Then there are rubber mats, which do not remove the potential for injury and fatality incidents to occur. Workers do not always use the mats due to the hassle of extra work they create when breakers or contactors are racked in or out. Rubber mats are also rendered ineffective when wet, which also causes workers to not use the mats. In wet applications, a three-phase GFCI (which can be used with a cart for portability), is the optimal solution to protect against shock.

It is easy to defend that any of the bottom hierarchy safety measures are the least effective methods of preventing injury and death. Yet people still rely on these methods as their first resort—which are supposed to be a last-resort method. PPE is required, ground-fault protection is not required for less than 1200 A and shock protection usually isn’t. This is not a reflection of their importance and most certainly their ability to protect, but rather it is a reflection of the American legislative process.

GFCIs are specifically designed to protect people from electrical shock. GFCIs monitor the current between a circuit’s grounded and ungrounded conductors. Any imbalance (with the exception of small amounts of leakage) indicates that the current is returning through an unintended path (such as through the ground or a person). If the GFCI detects an imbalance, it will rapidly shut off the power.

Class A GFCIs—such as those used in residential applications—shut the power off when the difference between the leaving and returning currents is 6 mA or more. This trip level, however, is unrealistic for manufacturing applications.

Therefore, plastic manufacturers require special-purpose GFCIs (SPGFCIs), which have a 20-mA trip level at a minimum of 1 second. This provides them with greater flexibility, while still providing complete protection from electrical shock. Additionally, there is a low probability of injury from currents up to 50 mA that last up to 2s with a GFCI, which is in the AC-3 zone (see Figure 4). 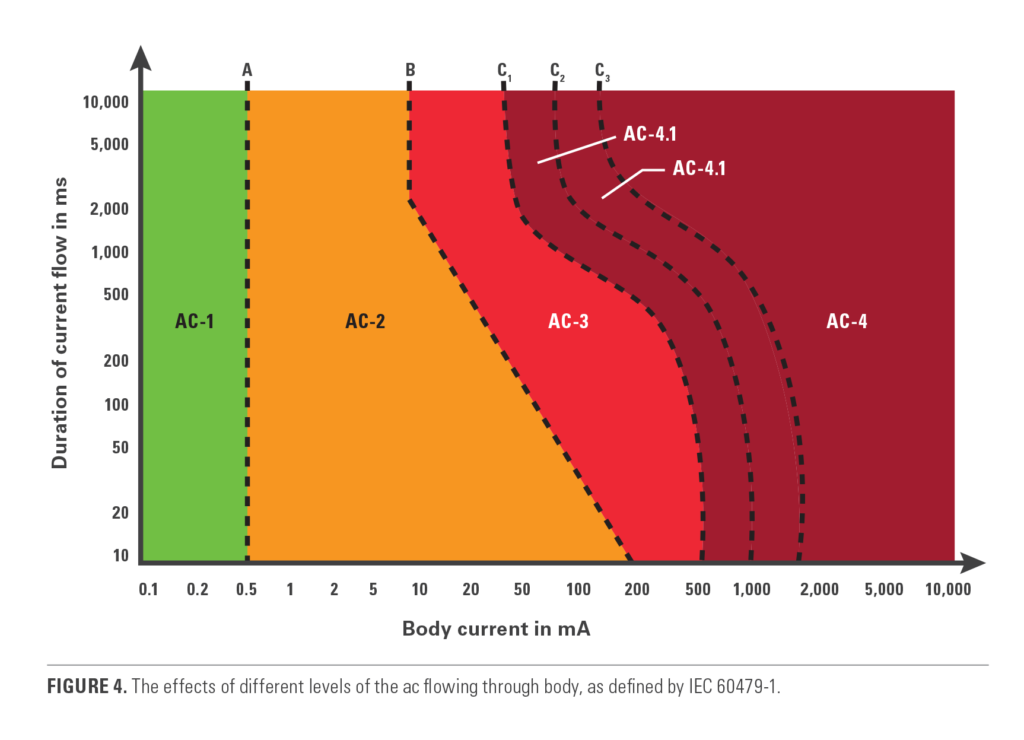 Systems that have higher maintenance requirements are less forgiving of human error and more prone to failure. As a reminder, it is the current, not the voltage that kills. This is why Class C, D, and E GFCIs are so important: they monitor the ground-return path continuity and then interrupt power if any integrity is lost. This in turn eliminates the possibility of any personnel being shocked or electrocuted.

Human life is priceless. A reliance on GFCIs (or any elimination method) saves both costs and lives. The cost of an incident exceeds beyond the steepest of OSHA fines. When a company focuses its costs solely on compliance, it fails to consider the cost of an incident. Even the best safety training and PPE for workers will still leave the company vulnerable to electrical shock injury and fatality incidents. Estimated costs should be framed in a way to consider the loss of an incident’s destruction by way of property and equipment, downtime, and above all—life.

Only in the aftermath of tragedies is it easy to understand just how important investing in prevention is. Human-based safety methods require them to be executed with consistent precision: without error, by every person, and every time. This is not possible because people make mistakes; it’s only human.

The survey results suggest that safety training is not working. If it were, workers would have a more accurate understanding of what makes an electrically hazardous situation, and shock injuries and fatalities would—at the very least—have leveled off over the past several years. Remember this, only a GFCI can protect a person from direct contact with an energized conductor. ESW

Rachel Metea is the technical writer at Littelfuse. She holds a BA in communications and an MA in journalism from DePaul University. Metea is a member of IEEE. A full report of the survey’s findings is available at Littelfuse.com/shock-survey. To learn more about GFCIs for manufacturing facilities, visit Littelfuse.com/ShockProtection.

How to Properly Care for Rubber Insulating Gloves, Sleeves, and Blankets to Extend Use and Safety

By Richard Rivkin, Contributor OSHA, NFPA, and the ASTM standards mandate the use of rubber insulating products when even the smallest probability of contact (with 50 ...
Read More →

A Q&A with Rich Gojdics, Senior Vice President of Sales, National Safety Apparel. Q: How do we identify potential risks and threats and why is it ...
Read More →
Leaders in Electrical Safety