Home » Features » Electrical Safety Statistics: Why Are Workers Still Dying on the Job

Electrical Safety Statistics: Why Are Workers Still Dying on the Job 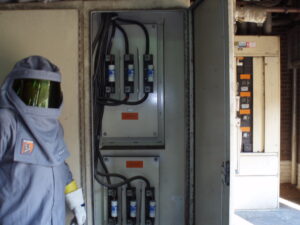 Standards for electrical-rated rubber gloves, sleeves, and blankets have been in existence for over 75 years.

Since the beginning of the American Industrial Revolution, workers have died on the job. In the latter part of the 1800s several states adopted different variations of state job safety and health legislation to protect workers, but there was limited enforcement. The introduction of electricity to the workplace provided a more efficient means to manufacture goods but created serious hazardous conditions for workers and frequently caused fires. To address this phenomenon, five different accredited standards from various organizations, such as the insurance industry were developed.¹ The principals of each standard met and formed a committee to determine a means to consolidate the standards. The committee settled on a single standard and the National Code under the directorate trade organization National Fire Protection Association was born.

The Code, later renamed the National Electric Code (NEC) 1897², was a pivotal action creating a consistent guide for all electrical installations and greatly reducing electrical-related fires. But even with this new standard, electrical fatalities increased as demand for electricity expanded. To address safety concerns, the additional safety standards were promulgated under the Walsh-Healey Act of June 30, 1936.³ And, in the generation, transmission, and distribution of electricity along with communications systems, work began on another standard in 1913. The new National Electric Safety Code (NESC) addressed areas that would not be covered by the NEC. In 1915 the National Safety Council was created to help squelch high levels of fatalities and Injuries spawned by the steel industry. At the time, the electric industry realized that the primary safety issues were clearance of energized parts, strength of supporting structures, wiring methods, and electrical work methods.⁴

Standards helped address the safety concerns of electrical workers but were only enforceable to a point and did little to hold employers accountable for the safety of their workers. In 1970, OSHA was signed into law by President Richard Nixon. The first electrical safety regulations were promulgated by OSHA. During the 1980s OSHA would develop multiple standards in General Industry, Construction, and Maritime. In addition, the Mine Safety and Health (MSHA) developed their own regulations.

With all the standards and enforceable regulations in place and protective equipment, the United States continues to have an unacceptable level of electrical fatalities. According to the Bureau of Labor Statistics (BLS), electrocution is the fifth leading cause of workplace fatalities in the U.S. with more than 2,000 fatal and more than 24,000 non-fatal electrical injuries reported in the last 10 years. Note: The BLS counts arc flash injuries as burns rather than electrical injuries, so they are in addition to the numbers stated above.

Where are Fatalities Occurring?

According to a recent research paper, at least half of all occupational electrocutions occur as a result of contact with power lines, and about a quarter as a result of electrical machines or tools. There are more than 30,000 non-fatal shock incidences each year that accounts for approximately 5% of burn unit admissions.⁵ Standards for electrical-rated rubber gloves, sleeves, and blankets have been in existence for over 75 years.⁶ Despite ample rules and regulations, electrocutions and serious burns are still happening.

¹ The History of Electrical Safety, CESNews 2021

Why Are Electrocutions Still Prevalent in the Workplace? 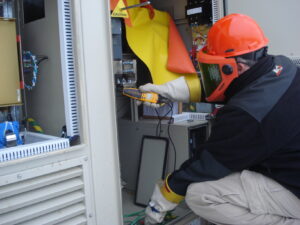 A qualified worker is one who as demonstrated understanding of construction and operation of equipment including the hazards involved and means to control the hazards.

I have been observing electrical workers in all areas of electrical exposure, from bare handling 450,000 VDC power lines to electricians working on 480-volt panels, and PHD Engineers working on Ultra High Voltage Test Areas, to Telecommunication workers stringing fiber under energized power lines and have investigated fatalities resulting from contact with high voltage and low voltage exposed electrical parts. Based on these observations, I can conclude two facts: we don’t have enough education for non-qualified workers who operate or install equipment around power lines, and second, qualified electrical workers don’t treat single phase or 208-volt 3-phase seriously, meaning they don’t wear rubber gloves as they should, especially working on residential electrical systems.

There are essentially two sources of fatalities and injuries for electrical workers. First, direct or indirect electrical shock, which essentially requires contact with an energized conductive part. And second, an arc flash incident that causes burns resulting from high incident energy created by a ground fault or short circuit (where two metal objects of different potentials or voltages contact each other).

Let’s start with shock hazards. One disparity causing confusion is the difference between the OSHA regulations and the NFPA 70E standards. The OSHA regulations require that we avoid contact from 50 to 300 volts. It has been long accepted that we can use insulated tools and simply avoid touching the exposed energized parts. In reality, if parts rated higher than 50 volts are exposed within arm’s reach, you are not avoiding contact so rubber gloves should be worn to do so. The NFPA 70E mirrored OSHA language until the 2015 version. The 2015 NFPA’s Restricted Approach Boundary no longer matched with OSHA’s Minimum Approach Distance. So, if the company’s written electrical safety program follows NFPA 70E, qualified workers would have to be protected if any part of their body can go within 12 inches to an exposed part over 150 volts, which now included 240-volt single phase and 208-volt 3 phase. For trainers this worked well because now, when opening doors or removing covers to energized parts (or de-energized and locked out until verified off by testing), rubber gloves are always required. Because a significant number of electrical fatalities are related to low voltage contact, adhering to this simple standard would likely prevent nearly half of the electrocutions we face in this country in construction, general industry, or in mines.

The other half of the serious injuries and fatalities are the result of direct or indirect contact with powerlines. Indirect is where a metal case of an electrical supplied device, tool, panel, etc. is energized― typically because it is not properly grounded. This is an extremely important connection for many reasons and includes the ground pin on extension cords and tool cords. GFCI protection can protect from indirect contact. OSHA now requires GFCI protection for all cord and plug activity related to construction and maintenance). This one work practice will save many lives for both qualified and non-qualified workers.

A qualified worker is one who as demonstrated understanding of construction and operation of equipment including the hazards involved and means to control the hazards. They must:

Unqualified workers who do not have sufficient electrical safety knowledge and are therefore required to stay away from exposed parts. How far away varies with the exposed nominal voltage. For low voltage (50-750 volts) this is 42 inches (based on NFPA 70E standard’s limited approach boundary). For medium voltage (751 volts to 15kV) this is 5 ft. and it increases as the voltage increases. Non-qualified workers are never allowed to encroach these distances. The challenge for non-qualified workers comes from performing a risk assessment when working with electrical parts. Because a high percentage of electrical contacts comes from low voltage, the risk assessment may start with inspecting and testing extension cords and hand tools. Or it may be examining service entrance equipment before setting up a scaffold. For equipment use in construction, follow the 10-ft. rule or 20-ft. rule for cranes, and always use a spotter if encroaching that distance.

An arc flash is intense heat and pressure that occurs from a short circuit or ground fault (two wires of different voltages touching). The severity is based on the fault current available and is directly proportional to the clearing time it takes a breaker to open, or a fuse to blow. This has a direct correlation to our electrical infrastructure. If breakers and electrical equipment is not maintained, the likelihood and severity increase dramatically. When I started my electrical career in 1978, the electrical panels and other equipment may have been 20 years old, but now that same equipment still in service is 65 years old. Risk is much greater than it was. Special emphasis should be put on additional precautions and risk assessment in these cases. OSHA requires that we do a coordination study and short circuit analysis (29 CFR 1910.303(b)(4) and (5)), but unfortunately regulations do not specify a timeline for updates. NFPA 70E requires that and arc flash analysis should be updated every five years. Since this engineering analysis includes the OSHA required studies, this works.

Based on statistical data on electrical fatalities and injuries, we still have over 150 fatal contacts and over 1,500 injuries related to shock each year. We can lower this statistic by:

If these basic steps are followed, we can significantly reduce electrical fatalities and injuries in the workplace. ESW

Lee Marchessault is the President of Workplace Safety Solutions, Inc. (workplacesafetysolutions.com) He started his career in the electric industry in 1978 and is an instructor for the OSHA Training Institute Regions 1, 2, and 4 teaching Electrical Standards. He is also an Expert Witness for Electrical Safety Issues. Over the past 20 years, Marchessault has written numerous articles in national publications and continues to present electrical safety for national venues. He is on the Electrical Committee for NFPA, a voting member of the ASTM F18 Committee, and an active member with other organizations including ASSP, IP, and NSC. For questions, lee@workplacesafetysolutions.com.

By Bryan Rupert, Contributor An arc flash analysis (AFA) is mostly performed by electricians and professional electrical engineers. The first phase of an AFA must be ...
Read More →