The Partnership for Electrical Safety is very happy to share significant breaking news – the United States Congress has just included very specific language on arc flash and PPE and urged OSHA to act to protect hundreds of thousands of commercial, industrial, and residential American electrical workers from this deadly hazard. The passage is in the FY23 House Labor/Health and Human Services and Related Agencies Appropriations Subcommittee bill which recently passed, and reads:

“The Committee is concerned with continued lack of compliance with OSHA’s and industry’s standards for arc-flash (AR) clothing and associated personal protective equipment (PPE) requirements that have been in place for over two decades. More than 600,000 American workers performing work on or near energized electrical equipment are exposed to deadly arc-flash related injuries and hazards on worksites across the country without the required lifesaving protection. This results in many catastrophic injuries and fatalities of American workers every year, virtually all of which are preventable. The Committee encourages OSHA to adopt an enforcement policy citing existing standards such as NFPA 70E, and for requiring appropriate arc flash protective clothing and PPE during all live electrical work performed in the United States”

The language itself is obviously highly significant, but so is the bill in which it’s found; this bill funds the DOL and OSHA and governs how that money is spent, so the words are magnified by the document.

OSHA has been actively engaged with arc flash safety professionals for over a year, exploring compliance, consequences of non-compliance and options to address the issue and protect workers. Clear signals have been sent around their intent to issue new guidance and possibly updated enforcement as well. While we do not have a crystal ball, we believe areas of new guidance are likely to include clarification on “deenergized” work, risk assessment, NFPA 70E, Arc Rated clothing, and associated PPE, including selection and laundering.

The myth of “deenergized work” is an issue primarily for commercial, industrial, and residential electrical work in the USA, not utility transmission and distribution. Dozens of workers suffer severe or fatal burns every year as a result. Unless you’re pulling wire in new construction not connected to the grid and with no temporary power, some portion of virtually every job over 50V is energized work. The term “deenergized” is widely misunderstood. Deenergizing itself is energized work, as is confirming absence of voltage; when the task is done, reenergizing is energized work, as is confirming the presence of voltage. Lockout/ tagout and deenergized are NOT the same thing, and NFPA 70E refers to establishing an electrically safe work condition (ESW) which also involves more than “deenergizing.”

OSHA is expected to issue clarification that all work being performed on electrical equipment is considered energized, with all necessary shock and arc flash personal protective equipment (PPE) being worn, unless the employer has conducted and documented in writing a thorough, accurate hazard analysis which definitively demonstrates that all the steps in the lockout and tagout procedure have been accomplished and that no reasonably adjacent energized equipment poses a hazard.

The number and severity of arc flash burn injuries would be dramatically reduced or virtually eliminated by compliance with applicable OSHA standards and by following the recommendations of National Fire Protection Association’s Standard for Electrical Safety in the Workplace, NFPA 70E-2021. 70E has excellent risk assessment tools and tables. While OSHA does not enforce NFPA 70E per se, they regard it as evidence of industry recognition of the hazard, feasible means of abatement, and as the preferred electrical safe work practice standard for substantially all commercial, industrial, and residential electrical work within its scope over 50V in the United States.

Far too many people claim they do not require arc flash PPE because they “do not do energized work.” Accurate risk assessment would quickly solve this issue. Deenergized is not the same as lockout/tagout, and most tasks thus described would fall under OSHA definitions of energized work. Equipment and circuits are either energized or they are fully under lockout/tagout. This recognizes that deenergizing is one step in lockout/tagout rather than being considered free of an electrical hazard. See 1910.333(b)(1) which states that “[c]onductors and parts of electric equipment that have been deenergized but have not been locked out or tagged in accordance with paragraph (b) of this section shall be treated as energized parts, and paragraph (c) of this section applies to work on or near them.”

Further, many people misunderstand the term “justified energized work,” and consider justification to perform energized work to be justification to conduct such work without shock or arc flash PPE. This is untrue, non-compliant, and highly unsafe. All energized work above 50V requires the appropriate shock and arc flash PPE. Documented Hazard Risk Assessment is vital and must be conducted. NFPA 70E 130.5(A) sets the requirements for an arc-flash risk assessment: identifying arc-flash hazards, estimating the likelihood that an injury could occur and the potential severity of that injury, and determining the need for protective measures, including the use of personal protective equipment (PPE). NFPA 70E Table 130.5(C) provides estimates of “the likelihood of occurrence of an arc flash event to determine if additional protective measures are required” for various tasks. In other words, that table identifies tasks that pose substantial arc-flash hazards to workers. Appendix E to §1910.269 and Appendix E to Part 1926, Subpart V provide a similar, but simplified, table.

Employers can use any of these tables to identify tasks posing arc-flash hazards requiring the use of protective measures, including PPE. Notably, all of these tables include using test equipment on electric equipment and circuit parts as posing arc-flash hazards. Table 3 in the OSHA appendices lists employees holding a conductive object that could contact energized parts as posing arc-flash hazards, while NFPA 70E Table 130.5(C) specifically lists “electrical testing” as having a likelihood of occurrence of arc flash that requires protective measures. OSHA standards (§1910.333(b)) require, and industry practice (NFPA 70E 110.2) recognizes that electric equipment and circuit parts must be treated as energized until the entire lockout-tagout process, including verification by testing that voltage is absent, has been completed. Thus, deenergizing, testing to verify that voltage is absent, reenergizing, and testing to verify that voltage is present are all considered energized work. In short, AR clothing and associated PPE are expected to be provided and worn for the significant majority of electrical work. We also anticipate clarification around task based and daily wear programs, laundering, care, and proper wear.

The road to arc flash protection in the United States began in 1994, when OSHA brought the issue to the utility industry, protecting over a quarter of a million workers. A few years later in 2000, NFPA added arc flash to 70E, and worked closely with OSHA in the process; this should have protected about 1.5 million more workers. OSHA issued two letters of clarification over several years in the early 2000s, and from about 2001-2010, about half of American electrical workers to whom the standard applies were protected. However, little to no progress has been made in over a decade since then to protect the remaining hundreds of thousands of workers. PES applauds Congress for taking action to fix this, and we look forward to updated OSHA guidance which we expect to dramatically reduce injuries and save lives.

By: Derek Vigstol, Contributor The electrical safety program is our opportunity to develop a specific set of policies, procedures, and reference material that can keep employees ...
Read More →

Why Relying on Safety Training and PPE Can Be Fatal By Rachel Metea, Contributor When workers are unsafe, a company cannot prosper. Unfortunately, electrical shock incidents ...
Read More →
Leaders in Electrical Safety 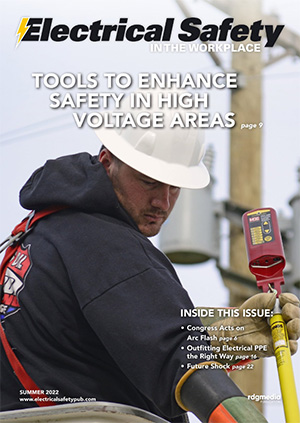